Getting started as a vlogger doesn’t have to be a challenge, and with the abundance of platforms available today, it has never been easier.

At A Glance: Our 5 Best Vlogging Cameras under $100

There are really only two things that you need as a vlogger: a vlogging camera, and something to talk about.

In today’s guide, we are going to be focusing on finding the best vlogging camera for under 100 dollars.

As you can imagine, this means that we’ll be looking for value for money above all else, so don’t expect the cameras on this list to be heavy on additional features.

But before that, let’s see if you can use something you might already have:

Using a Smartphone as a Vlogging Camera:

When it comes to vlogging on a budget, you can also use your smartphone camera to record your videos, and this may be more effective than you expect.

Depending on your phone, you may already have a camera that is more effective than any of these 100-dollar vlog cams.

If you purchase the right accessories and attachments for your phone, you can make it a capable vlogging device, and many well-renowned vloggers started off using their smart devices.

Of course, your phone will often be a stop-gap measure until you can afford a dedicated vlogging camera.

Sony’s DSCW800 is everything that you could want in a vlogging camera for such a low price.

This model combines affordability and excellent build quality into one reasonable package, making it the best choice for vloggers who are just getting started and don’t have a large equipment budget.

The 20.1 MP sensor allows you to capture video in 720p HD, which may not be the highest available quality, but it gives you a good ratio of quality to file size.

Even though you are losing out on some resolution, your vlogs won’t take up as much space and they’ll be quicker to upload as well.

The user interface on this camera is also excellent for beginners, as it uses the Simplify system.

Sony’s Simplify line of cameras take a simple point and shoot interface and combine it with a lens and sensor that are capable enough to provide superior quality.

Easy mode will further simplify the UI for complete beginners.

SteadyShot stabilization ensures that you won’t have any problems filming without a tripod, so you’ll also be able to vlog while you’re on the go.

Overall, this camera comes included with more features than you would expect in such an affordable model and it couples them with surprising build quality, making it best vlogging camera under $100.

If you don’t have a separate camera for other purposes, the COOLPIX L32 is probably the best choice on this list.

For example, the Smart Portrait system makes it much easier to focus when taking pictures of other people, though you’re probably more interested in features that can help with vlogging.

First off, this camera shoots in 720p HD, meaning smaller file sizes at the expensive of a bit of resolution.

The Vibration Reduction system allows you to zoom in and out while you are filming a video, which is a critical feature when doing lifestyle vlogs or leaving the house during a video.

Of course, this system also acts as a stabilizer, keeping your video from jittering around without a tripod.

Unlike other affordable vlogging cameras, the L32 features a relatively large 3-inch screen, giving you a more effective preview of your videos.

While this camera features a microphone built-in, you will likely want to opt for a separate one to record your vlogs, as it is simply insufficient for the task.

The COOLPIX L32 is one of the more versatile options on this list and a great Nikon vlog camera as well as a more traditional point and shoot.

The COOLPIX A10 is the best vlogging camera under 100 dollars for readers who want the most affordable option.

This camera is 15 to 20 dollars cheaper than the next most affordable model on this list and it doesn’t sacrifice too much in the way of filming capabilities, the most crucial feature for vloggers.

While the 16.1 MP sensor loses out on some quality when compared to other models in the COOLPIX line, it is sufficient for 720p vlogging.

When compared to other Nikon models like the L32, the A10 is less effective at taking still images but the difference in videos is not as noticeable.

The NIKKOR glass lens allows for optical zoom up to 5X, allowing you to film vlogs outdoors and focus on far-off subjects.

This camera also features excellent programming, coming equipped with 15 different scene modes as well as a scene auto-selection feature that takes the guesswork out of it.

Much like other cameras in the COOLPIX line, the A10 features Electronic Vibration Reduction, which is a fancy term for an image stabilization system.

This system works in both image mode and video mode, ensuring that your vlogs won’t be blurry due to the camera’s movement.

Overall, this camera comes included with more features than you would expect in such an affordable model and it couples them with surprising build quality. 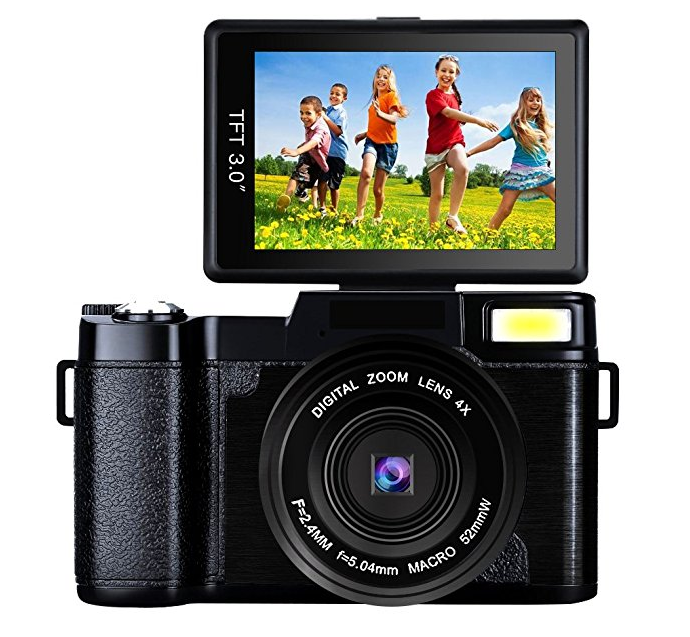 You may think that it’s impossible to find a 1080p (15 fps) vlogging camera under 100 dollars, but SUNLEA has proved otherwise with this model, simply known as the SUNLEA digital camera.

This model comes equipped with a few features that make it ideally suited for use by vloggers.

Perhaps the most obvious inclusion that caters to vloggers is that the camera has a flip screen, which lifts up and rotates 180 degrees so that you can see yourself as you record.

Some vloggers prefer to look at themselves as they work while others only like to do so once they get started with editing, but this camera gives you the option.

This camera also features specialized face detection systems which automatically adjust the white balance to keep the subject’s look from shifting over the course of the video.

The retractable flash is powerful enough to allow for recording in the dark, though we would still recommend dedicated lighting.

You may be expecting this camera to feature poor build quality as a result of its lower price point, though that is surprisingly not the case. The SUNLEA digital camera even comes included with a one-year warranty. 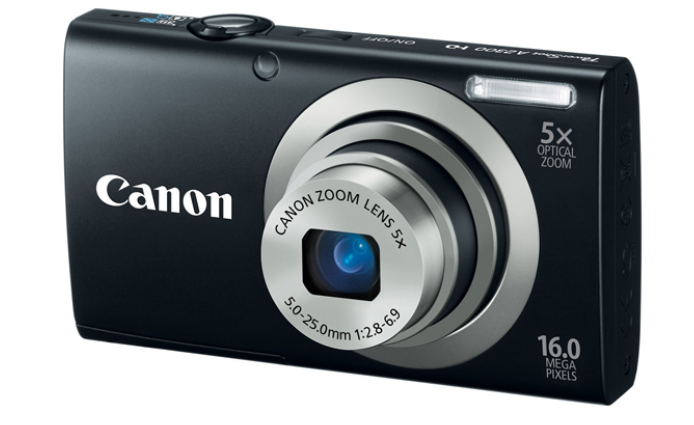 Canon’s Powershot A2300 may be a little more expensive than some of the other models on this list, but it is also more capable.

For example, this camera features 32 scene modes to choose from so you can always have the right settings for the current lighting conditions.

Moving on to features that are a little more focused on vlogging, this camera can shoot in 720p HD, which is to be expected at this price point.

While the sensor is only 16 MP, it is more than sufficient for use in recording vlogs, as the difference between it and a 20 MP variant won’t be as noticeable.

The A2300 is also an excellent choice for beginner vloggers, as it features a help button which will give you information about any function.

Overall, this camera sacrifices image and video quality for additional features when compared to the other models on this list. You’ll have to decide whether you prefer purely improved resolution through the use of a better image sensor or a camera that is easier to use thanks to a variety of bells and whistles.

What to Look for in a 100 Dollar Vlogging Camera:

Now that we’ve covered everything you need to know about the five good cheap vlogging cameras under 100 dollars, we can move on to our buying advice section.

In this part of the guide, we’ll be covering all of the relevant info that can help you find the right camera for your needs.

First off, we’ll look at the most important features that you can prioritize when buying your new vlogging camera. You may even want to make a checklist of the aspects that are most important to you, as that will likely make it easier to decide on a budget.

If you are going to be spending 100 dollars on a vlogging camera, you will have to make sure that you are buying a quality product, as affordable cameras often feature shoddy construction.

If you stick with reputable manufacturers like Nikon and Canon, you won’t be disappointed in your camera.

Of course, quality control issues are always a possibility, so you will also want to look for a long enough warranty.

If you don’t want to have to buy accessories and extras so you can start vlogging, you’ll need to invest in a camera with a quality microphone.

Since your viewers will need to hear you, the microphone that you use can make or break your videos, so most vloggers will use dedicated models.

Some vlogging cameras come equipped with specialized microphones, but the vast majority of them simply feature audio hookups for a separate one.

In the end, it’s probably a better choice to save some extra money on the side for a separate microphone.

The next thing to account for when buying your vlogging camera is the resolution in which it records video.

Most 100 dollar vlogging cameras will record at 720p HD, though there are relatively few models which can go up to 1080p.

Downsides of a Cheap Vlogging Camera:

When buying a camera in this price range, you’ll have to make some compromises.

For example, video quality will not be comparable to any good cheap cameras for YouTube.

Another issue is that you can’t often find specialized vlogging cameras at this price point, meaning that you’ll have to settle for point and shoot models that lack optimized features.

In the end, however, none of these downsides will stop you from vlogging, they’ll just make it a bit more of a challenge.

For additonal equipment, we recommend checking out tripods under $100 that we reviewed.

Thank you for taking the time to read through this buying guide for best vlogging cameras under $100.